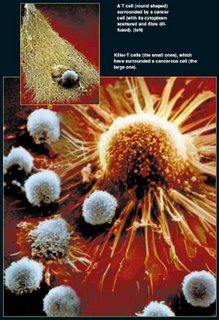 My neurons a bit tired now. Having spend all energy to make detailed PBL mechanisms. Usually I only used 2 pages but now it is getting up to 4 pages.

Immune system is quite complex if you go to the specific receptors involved and still there are more uncharted and unknown areas in human body.

The picture above...I took from Harun Yahya book. Nice to see all those lymphocytes (immune cells in human body) attacking cancer cells :)
Posted by Hafiz at 11:49 PM No comments:

Saladin animation - made in Malaysia

Cool 3D animation. Please wait for the video to be downloaded.

The animation is about the life of Salahudin al-Ayubi. The one who free Palestine from Christian Crusaders and this video is only the trailer. Can't wait to see the full length one :)

I knew this one from here
Posted by Hafiz at 1:44 PM No comments:

House is a famous medical series on US and Australia. I'm not sure about other countries though.

This series revolves around a genius doctor, Dr Gregory House (hence the name of the series) whose job is to diagnose disease which others doc can't. The word genius may be too exaggerating but probably true. He is not alone though. He is helped by three other doctors, one female immunologist, one neurologist and one, erm I think he is an expert in emergency medicine.

What is so interesting about this series that differentiate it from other typical medical drama is Dr House himself. He is not a typical doctor you see everyday. He does not care about his patient and try as much as he can, NOT to communicate with his patient. The communication is executed by his other three assistants.

What he cares is only the disease and he only treats disease not the patient. Neither ethical considerations nor the medical rules were ever part of his attitude. One doctor with an attitude ;)

His attitude, anti-social, hates everyone and the most repeated phrase..."everybody lies including the patient". Thus, this kind of attitude he had, always give him trouble in the end. Problem with his co-workers, nurses, friends and even his own boss and in one episode he is almost being sacked from the hospital.

The plot of each episode is rather typical. A patient comes to the hospital, they misdiagnosed and eventually Dr House become the saviour by diagnosing the real disease. The disease is often very rare and sometimes, even I never heard of it.

With this typical plot, what might influence me to watch House?

Hmm..some people watch House just to see how he survives many conflicts around him; some people like to see his 'atypical' attitude.

In Melbourne Uni word, although he is unfit and bad for HP but is rather excellent for PBL :)

From watching, I learned and revised many diseases. In fact, I managed to learn how to differentiate between the TV shows and the reality. Not all the diseases in House 100% correct. Some have questionable presentations which make me revised and research, to some extent, to know the true presentation of certain disease.

One week break of Easter holiday is almost reaching it's end now. Another five weeks of lectures, one week on SWOT and then.....semester exam.

and finally short/long holiday [long holiday if you consider doing research is part of holiday too ;)]
Posted by Hafiz at 11:43 AM No comments:

I saw this video just now. A blind person reciting the Holy Book, al-Quran. Subhanallah. Here is the link.

He may have been blind in this world but his heart is still able to 'see' the guidance from Allah SWT. He is able to memorize and recite Quran but how about us, who possess two beautiful eyes? Are we blind?

"Our Lord!" (they say), "Let not our hearts deviate now after Thou hast guided us, but grant us mercy from Thine own Presence; for Thou art the Grantor of bounties without measure." [Al-Imran : 8]

The emergence of Mozilla Firefox in the past few years have managed to disrupt the monopoly of Internet Explorer. Many users adopt the new browser while others tend to stick with IE. The most elegant feature of Firefox is the tabbed browsing and it is the most significant reason that I choose the Firefox instead of IE.

Another important difference is that Firefox is an open-sourced browser whereas IE is closed source. Basically, Firefox programming code is public and can be altered by anyone who possessed the appropriate talent and skills but IE is only known to few.

One can argue that many viruses and spy wares can easily penetrate this open source but you should remember that there are thousand more people who are working round the clock to defend this browser ;)

Due to this feature of being open to everyone, Firefox has thousands of various extensions that sometimes, even I could not think of creating that kind of extension. You just need to browse the various extensions available on Mozilla site and later choose one. Quite easy and up till now, I have installed 10 extensions and the Firefox remains stable. I thought this was too many until I found this….

This guy has managed to install 100 extensions on his Mozilla Firefox just for the sake of testing its stability. Check the link here

superbrowser :D
Posted by Hafiz at 11:45 AM No comments:

Today, I had GP placement and I found this quote hanging on the wall at GP clinic.
Posted by Hafiz at 5:42 PM No comments:

After several days, I finally understood what my friend wrote on the blog. Becoming too preoccupied with something else has made me knowing this kind of thing late. Too late to do anything else and my action might be interpreted wrongly. 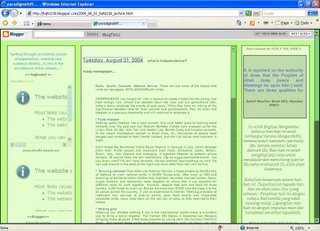 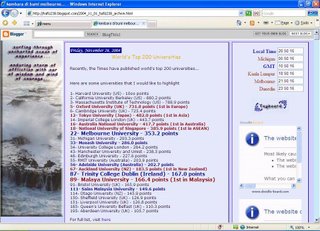 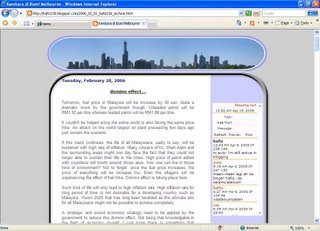 Three versions of this blog. See how the background colour changes and the blog title does not change that often.
Behind these three skins/templates, lies great wealth of knowledge that I have gained. From someone who does not know what HTML stands for to someone who is able to design the web :D
Posted by Hafiz at 8:56 PM No comments:

-love to see those colourful letters ;)-

A journey travelled by many. Many of whom stop and admire the beauty of temporary shelter. Such attractiveness of the shelter, that many travellers forget their purpose of the journey.

The heart gets infected and acquires much kind of diseases. Pure heart becomes beleaguered by diseases that most of them are curable. Pure mind becomes filthy and the purpose of the journey slowly erased and forgotten.

Traveller's sickness. The travellers have been given prophylaxis and management plan prior to their journey. But they become too much absorbed with the temporary beauty of the shelter.

Who are those travellers? They are you and All of us are travellers and our journey will end soon. Our heart once a pure one, now becomes infiltrated with many diseases. Hatred, jealousy, selfish...to name a few. Our cure...al-Quran but we tend to put the Holy Book aside and continue to enjoy the temporary shelter of this world. 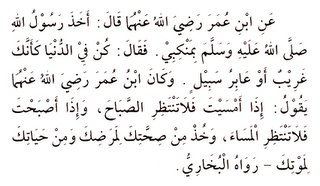 On the authority of Ibn 'Umar, radiyallahu 'anhuma, who said: The Messenger of Allah, sallallahu 'alayhi wasallam, took me by the shoulder and said:
"Be in this world as though you were a stranger or a traveler/wayfarer."

Cure our sickness by reading the verses of Holy Quran. Contemplate on the meaning and try as much as possible to apply the lesson learned from those verses. Don't let those sickness sway our mind and soul again and again.

A reminder to the author and to those who are still traveling in search of truth and gaining the mercy and blessing from Allah SWT. 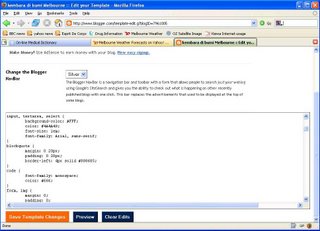 still unable to find the bugs that causing the header of this blog slightly lower than the blogger navigation bar.
Probably need to do a more thorough check or creating a new one....
Posted by Hafiz at 4:54 PM No comments:

Signs for men of understanding

003.190 Behold! in the creation of the heavens and the earth, and the alternation of night and day,- there are indeed Signs for men of understanding,-

003.191 Men who celebrate the praises of Allah, standing, sitting, and lying down on their sides, and contemplate the (wonders of) creation in the heavens and the earth, (With the thought): "Our Lord! not for naught Hast Thou created (all) this! Glory to Thee! Give us salvation from the penalty of the Fire.

003.192 "Our Lord! any whom Thou dost admit to the Fire, Truly Thou coverest with shame, and never will wrong-doers Find any helpers!

003.193 "Our Lord! we have heard the call of one calling (Us) to Faith, 'Believe ye in the Lord,' and we have believed. Our Lord! Forgive us our sins, blot out from us our iniquities, and take to Thyself our souls in the company of the righteous.

003.194 "Our Lord! Grant us what Thou didst promise unto us through Thine messengers, and save us from shame on the Day of Judgment: For Thou never breakest Thy promise."
Posted by Hafiz at 7:49 AM No comments: