Year One - The adventure begins 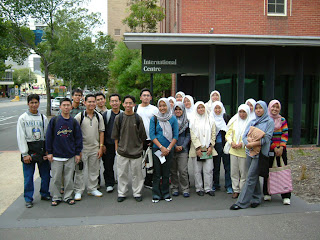 The JPA scholars were stranded and at one point, we had to ask permission from Malaysia Hall at Melbourne for temporary accommodation. Alhamdulillah, few days before arriving, one of our friends from Monash University managed to find an accommodation for JPA scholars (only for boys though). As a result of this, our female friends were left stranded randomly hopping from one house to another house for the next few months.

p/s: I have been living in the same house for the last 6 years. I guess I'm too lazy to get involved in the hassle of moving house.

I bought a bicycle in the middle of the first semester and has been using it to travel from home to university. I think the distance is roughly 4km. It was a good form of exercise for me. Whether it is summer or winter, raining or extremely hot weather, I persevere to use my bicycle as my main mode of transportation around the neighbourhood.

Right in the middle of the winter holiday, four of us, managed to cycle to Monash University, Clayton. It took us few hours to cycle from Melbourne to Monash University since we choose a route that was full of steep hills. It was a memorable experience for me and it was exciting to think that we have enough stamina to cycle for a trip that was roughly about 20km.

Grandmother
My grandmother passed away during my first semester exam. I was pretty close to her since she has been looking after me when I was little. I think the hardest bit when we are separated from someone is  not having the chance to show how much we love that person. Occasionally, the memory comes back to haunt me since I've never got the chance to say goodbye to her. Al-Fatihah to her.

On 15th of August 2004, I started this blog. Alhamdulillah, I managed to persevere with blogging until today despite that I have been blogging less frequently in the last few years.

Fruit picking and packing
During my first summer holiday, my friends and I tried various jobs to earn a bit of cash. Initially we went all the way to Mildura looking for job. Mildura is right at the border of Victoria, roughly about 300km north from Melbourne. Having no luck looking for job overthere, we went to Cobram which is also along the state border. Alhamdullilah, after few days searching for job, we got a job in one of the big farms over there.

My first job was as a cherry picker, but I quit after few days. The salary was not that attractive compared to the workload. Next, we worked as strawberry pickers. This job is quite good but it won't be good for your back since you have to squat throughout the day to pick the strawberries. Again we quit from the job.

Next, we went home to Melbourne and try our luck looking for job at Yarra Valley, which is about 50km west from Melbourne. We managed to find a job as a cherry picker again and this time, we managed to persevere with the job until the end of cherry season (middle of January).

I've written a lot of posts about my working experience as a cherry and strawberry picker. Read these post below if you are interested to know more :)

p/s: I'm not sure whether I still have the talent to write that kind of post anymore.

I think that is a pretty good summary of my first year :)

As part of  my final year exam at University of Melbourne, I had OSCE and one long case in the last two weeks.

OSCE stands for Objective Structured Clinical Examination. It means that you spend roughly 9 minutes either taking history from an actor or performing a brief but concise physical examination in front of an examiner or interpreting radiological images such as chest x-ray and answering several questions.

Long case means that you are given one hour with a patient in the hospital. In that one hour, you need to know why the patient is in the hospital and to perform relevant physical examination and at the same time, think of appropriate management plan for that patient. You then present your history and examination findings to two examiners. The examiners will be either a general surgeon, physician or a general practitioner. The examiners will asks several questions relevant to the patient and test the depth of your knowledge based on your answer.

I don't think I did well in my presentation and the examiners does not ask me any particular question related to asthma management. Instead they opt to ask me questions related to nephrotic syndrome. It was quite difficult since I haven't learned in detail about nephrotic syndrome. When they asked the type of glomerulonephritis causing nephrotic syndrome, I stumbled a bit and just said maybe diabetic nephropathy and rapidly proggressive GN. When they asked me to explain the mechanisms of hypercoagulability state in nephrotic syndrome, I guess this must be my limit. I'm not sure which clotting factors or proteins that will explain the symptoms. I mentioned several clotting factors, protein C and S and antithrombin. I don't know the real mechanism to explain those symptom.

Anyway, up to this point, they haven't asked me anything about asthma. If they were to ask me about asthma, I guess I could do a bit better in my long case.

Hopefully all my friends and I could pass the final year exam and able to graduate together on 5th December 2009.

Back in 2003, when I graduated from Mara College Banting  (MCB) with a diploma in International Baccalaureate(IB) , I have roughly about 7 months of holiday before going to Australia. The IB programme was initially designed for students who are going to universities in Ireland and United Kingdom (UK). Therefore the IB programme in MCB finished in the middle of the year and gave their students 2-3 months before starting their studies in UK or Ireland. Most if not all universities, at Ireland and UK start their intake on August/September.

At that time, there were only two Australian universities available to MCB graduates, namely University of Melbourne and University of Monash. I am among the first batch from MCB  who are going to study at Melbourne Uni.

My friends who were going to study at University of Monash, Australia had their 3 months orientation programme starting from September that year. Their orientation programme is held at Melbourne, Australia. I guess at that time, I felt a bit disappointed to learn that my friends at Monash were having fun and getting allowance at the same time whereas I have an extra long holiday after finishing my study at MCB.

So, what did I do at that time? After few weeks discussing with our MCB principal, and confirming that I don't have any similar orientation programme similar to Monash Uni, thus began the era of me looking for various sorts of jobs.

I initially planned to work  in a factory but the working condition and the low salary immediately turn me away from the job. Then, I thought of working as a cashier in a nearby petrol station but the position was not vacant at that time.

My mom suggested to me to work as a substitute teacher in her school. So, I took the opportunity and immediately got the job. I had to teach the entire Form Four in the school from the topmost class to the last class in the Form Four. It was an interesting yet challenging experience for me.

The last class in Form Four were filled by students who were not motivated to study or even came to the school. They had to come to school because their family forced them to come. They don't have any insight on the importance of having education for their own future. Compare this situation with the topmost class students who were quite motivated to study and willing to do lots of homework to improve their knowledge.

I had to be flexible in teaching these students and need to adjust the level of teaching according to their level of interest and knowledge. It was certainly an eye opener for me to learn the skills to teach students who are not motivated to study in the first place.

After two months of teaching, I retired from the job when the original teacher came back from her maternity leave. Thus, I was jobless again. I had to look for another job but what could I do then at that time? I had only SPM certificate and IB diploma, and hardly anyone knows what is IB programme anyway.

If I'm not mistaken, I retired as a teacher on middle of September and I had few months to go before I started my study at Melbourne Uni. Waiting for my flight to Melbourne was certainly a lesson in patience for me. Doing nothing during an extra long holiday is not something that suits me. I need to do something interesting. Otherwise I will be extremely bored killing all those free time.

After early retirement from teaching those students, I had to stay at home and look after my two younger sisters. My youngest sister was only 3 years old and her older sister was only 5 years old. Early in the morning, I had to sent them to a neighbour who will be looking after them and pick them up in the afternoon. Both of my parents are working and no one is at home to look after them. I'm not qualified enough to look after young children :)

It was during those days that I had the chance to learn how to cook. I never cooked any meals before. Hmm, looking back at those days, it was funny to see how I approach cooking. I always think cooking as a chemistry experiment where you add few of stuffs together and boil them in a frying pan. To get the taste right, you need the right amount of stuff and this ingredients need to be balanced. I constantly tried to find the right chemistry equation for different type of meals but I failed miserably in the end :)  There are too many variables that need to be adjusted to get the right taste and it was certainly will take me ages if I were to write equations for all the meals. In the end, I had to use my own taste bud to adjust the ingredients.

This is an already long entry for Year Zero. I guess I will stop here and continue later whenever I have free time :)