When physicians at an Alberta hospital asked why so many medical students and residents were using a faulty technique for inserting life-saving breathing tubes in patients, they received an unexpected answer: It's television's fault.

Many of the doctors in training said they had learned the procedure from watching medical dramas. And a subsequent analysis of the show ER revealed its fictional MDs and nurses performed intubations incorrectly almost every time.

It is horrifying to know that some medical students and junior doctors learned few of life-saving procedural skills via television, but this is the reality. In fact, I believe that many people learned CPR incorrectly from TV shows. Hopefully this current trend can be corrected. Otherwise, many medical errors will happen in the future.
Posted by Hafiz at 5:13 PM 6 comments:

It is the time of the year when people start to look around and ask for confirmation on when is the daylight saving period.

Daylight saving period is the time when you changed your clock either one hour forward or backward. It may seem confusing initially but when you are used to this annual change, it is no longer something that is amusing and perplexing.

People always get confused on whether to add one more hour or remove one hour from their clock. This is the mnemonic that I have been using in the past few years.

During spring, you add one more hour and in autumn, you remove one hour from your clock. If you are able to remember this, daylight saving period will no longer be confusing.
Posted by Hafiz at 11:38 PM 4 comments:

I attended this event last saturday and have been delaying to write about this for about a week.

This event was organised by Hayaat Project, a new NGO in Melbourne. I believed their main aim is to improve health care system and solving various problems relating to accessing health care for Australian Muslims.

Dinner
The event was held in a Turkish Restaurant. We were waiting for hours for the main meal to be served. The service was terrible and all the participants were hungry to the extent that we have to eat the side dishes first.

We were at top floor but it seems the air conditioning does not work or the restaurant has poor air circulation. We were literally roasted throughout the dinner. It was quite hot that few of the participants had to leave early.

I would not recommend this restaurant to anyone in the future.

Discussion
There were several interesting point being discussed among the participants.
All of these issues were important and highlight that lots of effort need to be made to improve Muslim health-related issues around Melbourne.

p/s: One of the participants reminded us that many Muslims nowadays are trying so hard to communicate with many Muslims around their area but many forgot to know their own next-door neighbours.
Posted by Hafiz at 11:28 AM No comments:

I'm currently doing three weeks of Emergency Medicine. This rotation is one of the rotations that I've been looking forward to do since pre-clinical years. It is an interesting yet challenging at the same time. It can sharpened your skills in diagnosing wide variety of acute and life-threatening medical conditions and at the same time, provide me with lots of ample opportunity to do procedural skills.

There are two shifts everyday and each shift lasts for about 6 hours. Each people have at maximum, three shift per week. For this week, I have done two morning shift and one night shift. Next week, I will do two night shift and one day shift.

From my observation so far, morning shift is not as busy as night shift. However, there are times when the night shift is lacking of new admissions. Sometimes, it can be boring when you don't have anything to do but you can always clerk the patient and present the case to the registrar or to the consultants.

My group is quite enthusiastic and have managed to do scheduled rosters for weekends as well. I might be a little bit busy in these three weeks.
Posted by Hafiz at 11:20 AM No comments:

I will finish my current rotation tomorrow. Overall, this rotation is felt like an extended summer holiday for me, since there is so much free time in a 6-weeks rotation. This are the medical abbreviations I learned in Rehabilitation, Aged Care, Palliative Care and Psychiatry of Old Age (RAPP). 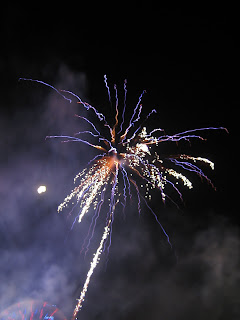 Some of the best shots that I took with my old camera. In hindsight, my place was not the best spot to take pictures.
Posted by Hafiz at 6:38 PM 2 comments:

Since I don't know what else to write at the moment, I will write the statistics regarding this blog. I have been using Google Analytics since August 2006.
Statistics (August 2006 - March 2009)

Total visit : 19906 (Pretty low and this is expected since I don't write anything that can attract large audience)
Total Pageviews: 28439
New Visitors: 68.16%